Longer version of a review I wrote for Show Business Weekly, appearing here by kind permission of the editor.* 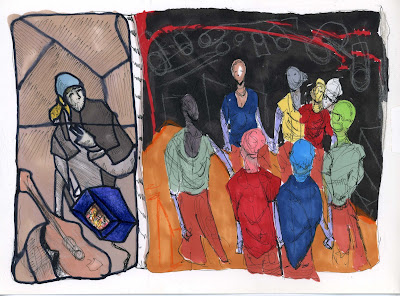 Chekhov's The Three Sisters could be a blocking nightmare. The first two acts move between two rooms: a sitting room in the front, and a ballroom which can be seen behind the sitting room, with action often taking place in both rooms simultaneously. The Assembly Theatre Project is staging an inventive, lively, passionate Three Sisters which answers well both the demands of the play and the oddities of their performance space.

The stage at the Red Room is deeper than it is wide (really—it's like a stick of gum); there is some seating at the foot of the stage, but there are also seats disposed along its length, almost all the way to the upstage wall, interspersed here and there with prop chairs. Three television screens upstage, center, and downstage are hooked up to a hand-held video camera (video design by Edward Bauer and The Assembly). Throughout the play, the characters pick up the camera and film, zooming in on one another's faces, clowning around, handing it from person to person. Occasionally they point it at us, and we sit tense and blank, pretending to be furniture.

This device does something to leaven the dreary naturalism with which Chekhov is nearly always treated; after all, people never act less natural than when they're being filmed. It's also an elegant solution to the problem of the second room—when characters disappear into the “ballroom” (a tiny area backstage), the camera follows them, and the screens show us what's happening alongside whatever's going on in the sitting room. We can be in two places at once. The actors use the full length of the stage, striding up and down, conversing from opposite ends of a room, breaking up into little dyads and triads and clustering about tables and chairs. The staging and the television screens create multiple points of focus and intersecting lines of sight; there's always a lot to take in, but the effect is engaging and harmonious. The side chairs are probably the best seats in the house at Three Sisters, since this geometry would be more or less flattened if viewed from the “front.”

The production has other ways of involving us besides capturing us on film. As the audience trickles in, the titular three sisters are already ranged about the stage, and we must walk past them to get to our seats. Richard Foreman's Idiot Savant continued after we left; The Assembly's Three Sisters started before we got there. The play opens with the eldest sister, Olga (Kate MacCluggage), remembering how their father died exactly one year ago, leaving them a rambling house in the provinces, their out-of-place educations and each other. Irina (Emily Perkins), the youngest, is quick and vital; she is determined to work, and orders Chebutykin (Chris Hurt), the elderly army doctor who dotes on the girls, not to be her friend any longer if she grows lazy. Masha (Kate Benson), the brooding middle child, shocks everyone by wearing black and saying what's on her mind. Their brother Andrei (Ben Beckley) will soon betray them (spiritually, intellectually) by marrying the low-minded, house-proud Natasha (Alley Scott), and their only pastime is entertaining some local officers. Their get-togethers have something of the festive, unrestrained quality of an evening with the March sisters in Little Women, but we're never sure if the caustic remarks conceal deep-rooted affection, or if the affectionate gestures conceal simmering contempt. The officers, educated and well-bred, are a cut above the townsfolk, but they're also an energy drain, and they can't seem to stop declaring their love for Irina. Eventually—in six months, in a year—the sisters will tie up their loose ends in town and return to Moscow, and the present will fade a bad dream. 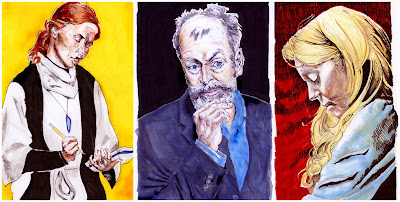 As Masha, Kate Benson doesn't pull any punches. She's hectic and shrill, alienating and weird. Her laughter is shocking and unprovoked. Her rhetoric flies wildly about, striking anyone who gets in its way. She's not graceful or charming: she's an intelligent woman chafing at the confines of an impossible life. There seems to always be a Masha with Chekhov; he likes to dress her all in black and marry her off to a well-intentioned but buffoonish schoolteacher. At least in Three Sisters, unlike The Seagull, Masha gets her man—the romantic, philosophizing Vershinin. As Vershinin, Levi Morger is open and appealing, a pleasure to watch every moment. Just as the sisters dream of what their life will be like in a few months, Vershinin dreams of what the human race will be like in two or three hundred years, how sublime and perfected life will be (indeed, “two or three hundred years” becomes one of the play's refrains, along with “what difference does it make?”). But he's also determined to seize happiness now, with Masha.

Seated literally in the midst of the action, at times we feel like guests at a really good party, and at others—when Andrei is teased and shamed by his sisters, or as Natasha tightens her choke hold on the family—it's almost too much to bear. We stopped being surprised by fourth-wall-violations long ago. But Three Sisters invites us in so gently, so courteously, and the production takes our involvement (and the obligations that come with it) so seriously, that we rush to meet it halfway. The second act concludes with some business about tea; we are brought tea at intermission (last Friday, the stage manager bustled out with his tray and asked, “who wants tea?” We laughed. He said, “No, seriously”). The final act takes place in an orchard; we are given dead branches to hold. This is hilarious, but it's more than superficially clever—peering at the scene through branches, we are standing in for our own voyeurism, which becomes a part of the play. In this way the stage, and the production itself, are redefined to include us and the entire theater, and it is magical. We are transformed.

*Check out some of my other reviews: Jump Jim Crow, Brecht on Brecht, The Seagull, Cross that River, Lizzie Borden

Posted by Marianne Moore at 6:54 PM