Signs we may live in a science fiction future

If you were living in a speculative fiction, you'd want to know, right? It's 2010, and the sci-fi books and films we grew up on are starting to come of age. Fritz Lang's Metropolis is set in 2026, Bladerunner in 2019. In its maiden voyage, that cumbersome and unwieldy vessel known as The Farley Post Office offers three signs that you may be living in someone's invented version of the future.

1. The Ziggurat is here.
(See: Metropolis)

In Fritz Lang's Metropolis, the outsized Gothic buildings represent a symbolic disconnect between the city's workers and the people in charge. Recently unveiled Dubai tower reveals a different kind of disconnect, like between Dubai and reality. Sure, real estate values have dropped by more than 50 %, and sure we're teetering on the edge of bankruptcy, but let's not lose sight of what's important: Dubai Tower has the world's most elevated swimming pool! If The Bible (the world's most widely read speculative fiction) has taught us anything, it's that building something really really big always precipitates an apocalypse. 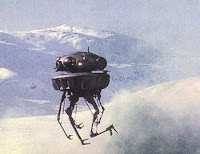 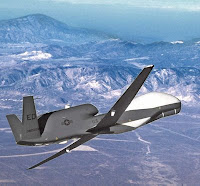 Recently I had a conversation with a friend about the unmanned aircraft the military employs openly in Iraq and Afghanistan (and the CIA covertly everywhere). She asked me what they were called, and I said, "predator drones." Later, I suffered a fit of agonized embarrassment, thinking that I must have been remembering something out of Star Wars. Surely the real-world technology had one of those cryptic military names that sound all the more sinister for being so scrupulously emptied of emotional content (like how bombs are called "ordinance"). I found later that I was right (the device pictured left, scampering on spindly metallic legs across the Ice Planet Hoth, is an Imperial Droid). Video games used to try to imitate warfare as accurately as possible; now it's the other way around. The same suite of aircraft includes the even more douchily named MQ-1 Reaper, which is capable of delivering 15 times more "ordinance" than the Predator.

3. In the future, everyone is Asian
(See: Bladerunner, The Fifth Element) 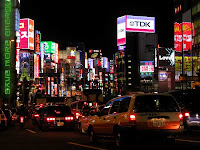 When filmmakers imagine the future, they often imagine it populated almost exclusively with Asians, hurrying down steam-filled alleys made up entirely of noodle stands and lit with red neon. I think this has less to do with the fact that the world's population is already overwhelmingly Asian (over 60%), and more to do with the glimpse that cities like Tokyo give us of the overpopulated future that is likely to become a universal reality. Get used to it, people: soon your apartment will be in your bathroom and your computerized musical bidet will also cook your breakfast.
Posted by Marianne Moore at 1:35 PM